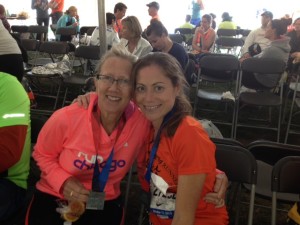 “It’s not how you start that matters. It’s how you finish.”~Source unknown

The first time I ran any distance (other than 7th grade gym class) was in college.  My roommate was a cheerleader at Indiana University, and had the energy of a Labrador retriever. She convinced me to go for a run with her sophomore year. Somewhat surprisingly – given the fact that we ran in circles in a stuffy fieldhouse – from then on I was hooked. Running became both my obligation and my Zen; a daily ritual like brushing my teeth. From my university days in southern Indiana, to my move to Chicago, to my marriage and the birth of my four beautiful children, it has been a consistent way I connect with myself when life feels too frantic. Some days running feels like a burdensome chore, but most days – while not exactly sheer bliss – my run is cathartic.

For years I logged thousands of miles without entering a single race. After all, growing up I wasn’t much of a competitor unless you’re talking about the second grade spelling bee. Sure I took hours of aerobics classes and shook shiny pom pons from the sidelines of high school football games. But the closest I ever got to actually playing a sport was when I went out for the girls softball team my senior year of high school. Looking back, I wonder why I waited so long. By then I was intimidated by those girls who had the hand-eye coordination of Olympic ping pong masters. They’d been playing softball since they could fit a tot-sized glove on their hand; I was just clumsily fielding pitches for the very first time. Time and again, the ball rolled (er, dropped) from my glove during catching drills. Needless to say, I didn’t make the cut. Though I didn’t hang up my legwarmers and sweatbands, I gave up the thought of ever being a true athlete.

Fast forward more than a dozen years, when it felt like I was having babies more often than anyone should. Josie, my oldest child and my only daughter, came out charging from the get-go. From the time we introduced her to the swim club at age five, she was fast and fierce in the pool, a redheaded force to be reckoned with. Then, at the suggestion of a phys-ed teacher in 6th grade, she took up cross country and track. My two oldest boys take after their father, a natural athlete who – while not the biggest of the bunch – was smarter, quicker, and faster than most. Though golf has replaced the football and wrestling focus of his youth, his “glory days” stories never grow old.

For a while my two oldest boys played a different sport every season. Then along came my youngest, AJ – now eleven – who also wanted in on the action. Add it all up and I’m the typical 21st century mom, sometimes trekking hundreds of miles in a single weekend to cheer on my children. As exhausting as the overscheduled weeknights and overnight hotel stays can be, I love the rollercoaster. But after witnessing the dedication and passion my kids have shown for their sports, somewhere along the way I started wanting more, too. I didn’t want to be benched any longer!

For years, friends and family asked me why I didn’t enter races. I just shrugged them off and said it’s not for me, that I was happy getting the exercise and peace of mind an early morning run can bring. But as I watched my children train and compete – always striving to be better, building more character than muscle – a feeling I was unfamiliar with started to creep into my psyche. What was really stopping me from trying a race? Was it that I truly didn’t want to, or was it the fear of failing that was holding me back? I wasn’t sure, but as time went on, my desire to stand at the starting line grew.

Finally, I quietly signed up or the Popcorn Panic, an annual 5-miler in Valparaiso, Indiana that celebrates our local legend Orville Redenbacher. The morning of the race, I snaked my way into the crowd of 5,000, unfamiliar with my sudden rush of adrenaline. Once the gun went off, I caught my breath and took flight with the throng of other runners. That day I came in 12th in my age group. Not half bad for a first timer. Maybe I could do even better?

Two years later, in 2013, I ran the same race again. This time, I came in third in my age group. My time was better than it had been two years before. I was getting older, but my running was faster than it had ever been. It was time to set my sights – and training schedule – on a new goal. A half-marathon.

I’d never run longer than six miles and nothing close to 13.1. But before I lost courage, I quickly registered myself for the race. It was in my hometown, so there would be no excuse about travel hassles. Next I phoned a dear friend I’d lost touch with over the past few years. When I’d bumped into Susan at Target the summer prior, she was beaming as she told me about running her first half just a few months before. I admired the obvious pride she felt at her accomplishment. Time for me to show myself – and my kids who thought of me as “mom-who-runs-for-chocolate” – I could step out of my own shadow.

Susan agreed to be my training partner. For several Fridays before the November race, we met for long, cool runs after the kids went to school. Eight, nine…up to 12 miles in length, they always left me feeling more exhilarated than exhausted. But it was more than a simple sense of purpose that was blooming. Something unexpected occurred out of my pledge to push myself physically. Our friendship was rekindled during those runs, where there’s nothing to do but talk about husbands, kids, jobs, and political views. We finished every run feeling refreshed, not just from knowing we’d put in the mileage, but from the hours we’d spent talking that had cleared our heads and brought us closer.

The week before the race I carried bottles of water like newborn babies. The night before I went to bed early, but it was difficult to sleep. I tossed and turned until my alarm went off the next morning and almost instantly, self-doubt set in. Maybe I would hit the snooze button and skip the race. I quickly shook off that thought, pinned my number to my T-shirt and managed a couple bites of peanut-butter slathered bagel. The kids were sleeping as I slipped outside, watching anxiously for Susan’s car to pull in the driveway. She showed up five minutes early, an extra cup of Starbucks coffee in hand.

The morning was windy, but very warm for November. Once the gun sounded, I took off in a slow, controlled pace, careful not to try to keep up with the fastest pack. Not finishing the race under my goal time would be disappointing, but not finishing at all would be much worse! I glanced over as I ran past the first mile marker. Nine minutes. I didn’t panic, but knew I had to pick it up since the second half of my race might be slower. At the third mile marker, I was at 25 minutes. Not bad. I felt a little boost of confidence. I searched for mile six, knowing that would be a pivotal mental point for me. It came and went but the wind picked up and I felt like I was treading water. I fumbled with my iPod, trying desperately to fight the ferocious gusts.

At mile marker 12 it was time to kick it in. I could do this, just one mile left to go! I willed my legs to move faster and on that last stretch I passed people who’d been running ahead of me all race. I soared past the finish with Susan snapping my picture. (Okay, so she only got my legs in the photo.) As my right foot landed on the last timing pad, the clock flashed: one hour and 58 minutes. Not only had I made my goal time, I’d crushed it!

A few months later I got a phone call. It was Susan. She’d just been to a runners club meeting and had information about a local team training for the Chicago marathon. Neither one of us had ever attempted the runner’s pinnacle of 26.2. Would I like to do it with her, she asked?

I barely hesitated before answering. It was not the response of a mom-who-runs-for-chocolate, but that of a real competitor.

“When do we start training?”