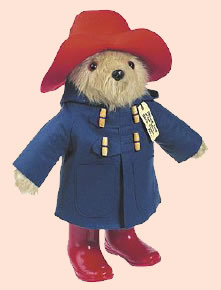 Paddington Bear is a celebrity! You can read all about how he got his start in a book written by Rosanne Tolin called MORE THAN MARMALADE: Michael Bond and the Story of Paddington Bear.

Find out what inspired Michael Bond to create Paddington. Michael took him everywhere he went!

SWEET reviews for MORE THAN MARMALADE

Sounding a timely note, (Tolin) also weaves in as a recurrent theme experiences with and lifelong sympathies for immigrants—from Jewish Kindertransport refugees and children evacuated from London during the Blitz to later contacts with Afro-Caribbean and West Indian arrivals in London—that informed (Bond’s) most famous creation’s character and overseas origins.
–Kirkus Reviews

A very readable and enjoyable book…this title will delight Paddington fans and appeal to readers who enjoy nonfiction works like the “Who Was?” series.
–School Library Journal

In this first-ever biography of the beloved children’s author, Tolin gives devoted fans a look into Bond’s life and how he stumbled upon the bear that changed him…. Her intimate writing style makes readers feel she is talking directly to them.
–Booklist